“And Then Emily Was Gone is a perfectly pitched opening to what is destined to become a gradual descent from faintly unnerving horror to gut-wrenching Lynchian nightmare over the next five issues.”

“The Bonnie Shaw myth is one that will keep your children staring wide-eyed at the crack of light beneath their bedroom doors.”

“The Comix Tribe published comic comes out swinging a hammer and should easily go toe to toe with any comic from the more mainstream independent publishers.” *****

“I’ve never read a comic like this and I doubt I’ll read many more after it which is exactly why it’s rare. It’s a comic experience that you do not want to miss out on.” 5/5

“There’s a nice, disturbing sense of doom and dread hanging over the whole issue, generating an appropriately creepy atmosphere, between Lees’ story and Laurie’s artwork, which adds in no small way to the creeping dread feel of the story.”

“And Then Emily Was Gone #1 is a very intriguing book.”

“And Then Emily Was Gone is an interesting tale that will gain a cult following. If creepy, mystery stories are your thing I highly recommend going out and picking the book up.”

“Iain Laurie… executes the story perfectly, wrapping the readers in the claustrophobic, grimy cityscape of Greg’s waking nightmare, populating it with monsters that are delightfully distinctive yet unpleasant to witness.”

“What a uniquely bizarre book and I’m totally intrigued with it. The art is just as disturbing as the story, and I mean that in a good way.”

– The Fellowship of Geeks

“Combining the best elements of horror and detective fiction, this sinister tale provides an intoxicating foundation for the creators to build upon in future issues.” 10/10

“An intriguing new player in the indie horror genre.”

Thank you to all the reviewers for their kind words!  People have also been commenting on the book outside of written reviews.  Carl Li had praise for And Then Emily Was Gone on his Youtube show, First Impressions.  From around the 25 minute mark, you can hear the hosts of the Two-Headed Nerd podcast talk about the comic.  And from the 31 minute point, you can hear the book being discussed on the MOMBCast.

Finally, I had an in-depth discussion with Kyle Welch of the Pages & Panels podcast, in which we go through the issue page by page in the style of a director’s commentary.  It was a really fun chat, and once you’ve read the first issue, I’d highly recommend you give this a listen.

Everyone at Team Emily has been utterly gobsmacked by all this positivity.  Thanks to all of you for checking out the comic, it means a lot that you enjoyed it.  And stick around for issue #2 at the end of this month… each issue is darker and crazier than the last! 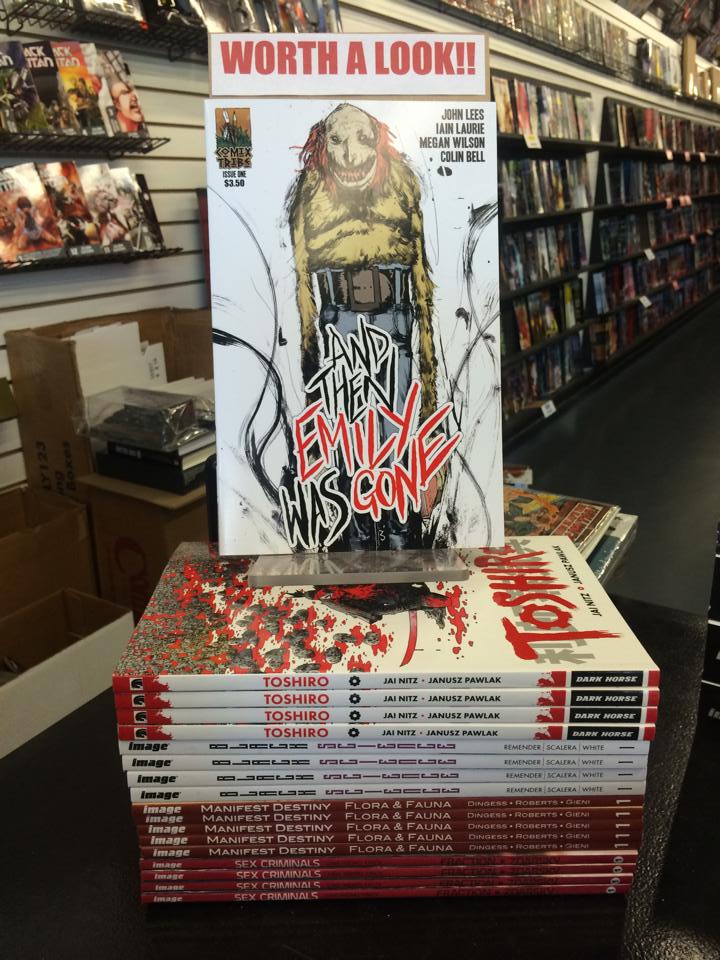 One thought on “And Then Emily Was Gone #1 Debuts to Critical Acclaim!”